Before leaving Stockholm, I traveled for two hours via boat to the World Heritage site Birka.  Birka is one of the places on my trip that I was adamant to visit.  This island to the west of Stockholm was an important trading center for the Vikings, which handled goods from Scandinavia as well as Central and Eastern Europe and the Orient. During the tour we learned that Vikings were not all the raiders that we so often associate with Vikings. Per the Swedish tour guide, the more vicious Vikings were Danish. From various comments I learned there is still a friendly feud between the Swedes and the Danes.  The Vikings also did not have horns on their helmets.

The island has many Viking burial mounds.  The mounds were used before Vikings became Christians and changed their practices to burying people in a more traditional cemetery.  The mounds are interesting in that you can tell the importance of a person by the size of the mound.  Things that looked like rocks to me were actually markers for the mounds.  Women mounds were marked by  round rocks.

After leaving Stockholm, I drove to Uppsala, just north of Stockholm by about an hour.  Uppsala is home to the Carl Linnaeus, one of the most important scientists ever, who was professor of medicine at Uppsala University in the 18th century. It was at the Linnaeus Gardens that was hoping to learn about native Swedish plants.  I visited 13th century Uppsala Cathedral for Gothic architecture, priceless relics and treasures, and the Uppsala Museum to learn more about Swedish history and culture. I stayed at an Air BnB and met a lovely lady who took me to a “loppis” which I learned literally means flea, so we visited a flea market.

At the Carl Linnaeus Museum I learned not only about plants, I saw a new way of showing visitors the museum. As one might expect, many languages are spoken by visitors at the museum.  When I checked in, they asked me what language I needed, then gave me a small laser light.  When I visited each room, I could point the light at a spot and hear the interpretation for the room in my headset.  Parts of the gardens were being used for a wedding, which added even more to the beautiful of them.  At the gift shop I purchased one package of seeds of each variety.  Since they were packaged, I felt I could take them home, only to find out in Minneapolis, I could not.  What plants are ok for use on the Peterson farm?  Definitely peonies, irises, lilacs, rhubarb and a lot more that I wouldn’t have felt would be appropriate.

The Uppsala Cathedral is very impressive.  There are crypts around the edges of the buildings where wealthy benefactors and royalty are buried.  Just when I thought I had seen an impressive stature or painting or a person I recognized I came to another more impressive crypt or more powerful person.

The Uppsala Slott is opposite the Cathedral.  The photo below shows the Cathedral view from the castle.  The castle now houses a museum which was filled with artwork, and a traveling display.  The large lower photo shows the bell tower.

The Uppsala Museum is a treasure.  The history in the museum alone was worth the visit, but they had a traveling tattoo display which was wonderful.  One exhibit piece in the main museum particularly caught my attention.  It was a door, shown bottom left, from a prison.  The man in prison had carved the following in the door.  Roughly in English it says, ” On February 9, 1631 I came to this place.  On September 28, 1631 I died. 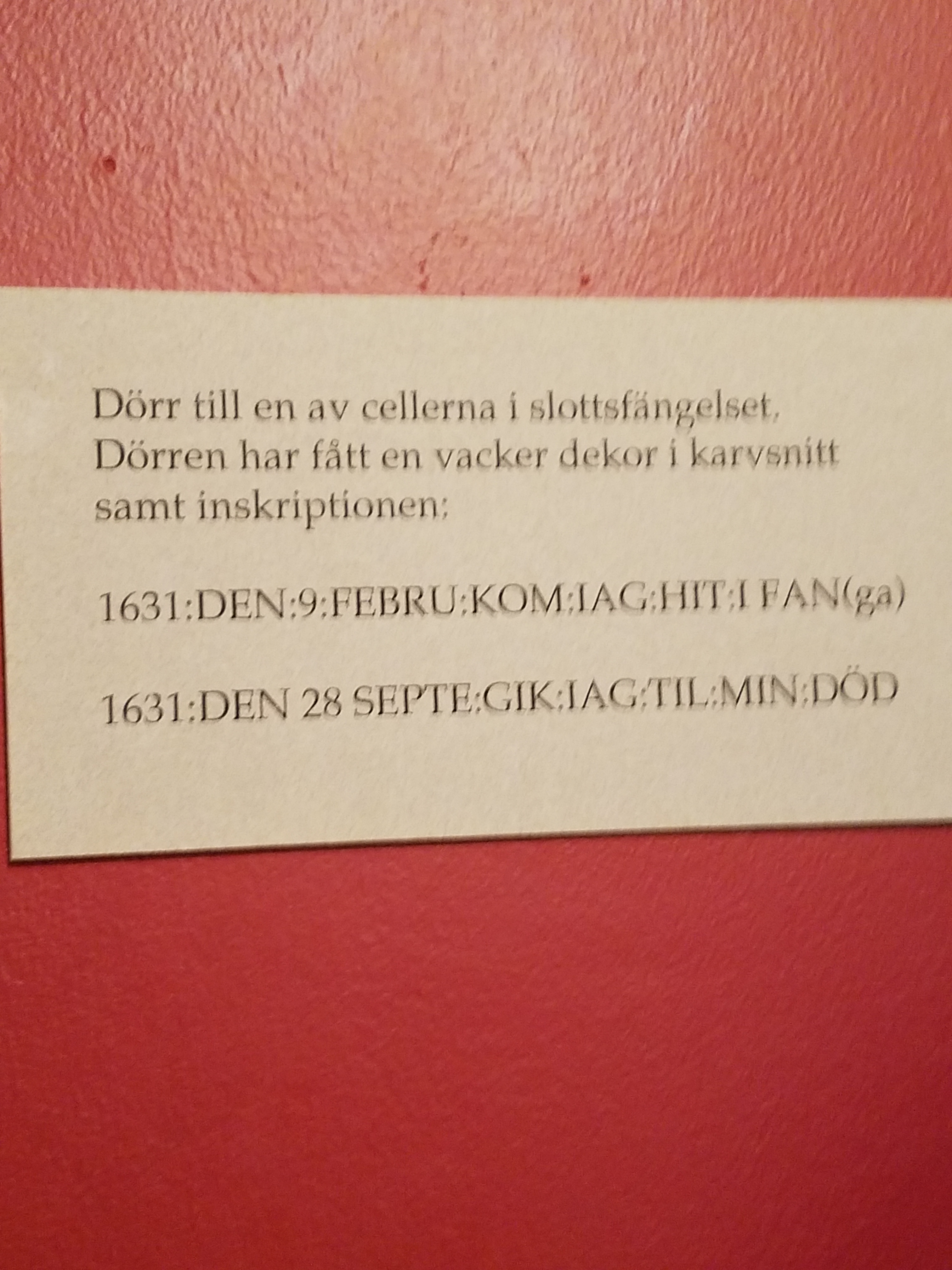 Urlika (below top left) was my host at the air BnB in Uppsala.  She took me to a loppis where I purchased THREE dala horses for about $30.  One of them would have cost me at least that much in a store, if not more.  The lady top right, was selling linen to raise funds for a children’s orphanage in Africa.  After I bought the linen and left, I came back and had the picture taken.  She then gave me a small packet of matches as a thank you.

For those not familiar with an air BnB, it is the home of a person who agrees to rent out a room to people.  The people I met on this trip really made it.  To Urlika and the lady who sold me the linen.  Thank you so much.

Next time: North I go to Dalsbo and even more wonderful people, who now call me part of their family.